Do You Know The History of Wakeboarding? 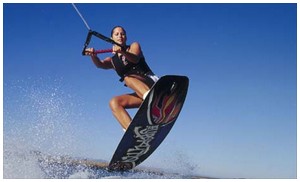 Although wakeboarding is considered a relatively new sport, there is still quite an interesting and complex history behind it. It is first important to know that wakeboarding is actually not a single sport but rather a combination of various ones, and is a derivative of many sports intertwined into what it is today.

The History Of Wakeboarding

Wakeboarding more than anything was derived from surfing, which has long been a favorite sport of beach dwellers. Then in the summer of 1985 foot straps were added on to the basic surfboard, a concept that has a great significance, one that absolutely cannot be overestimated when it comes to the evolution of wakeboarding. These foot straps are what allowed for big air taking the sport to something that was much more than just surfing.

Tony Finn has been of the most prominent names in the history of wakeboarding, and it was he who promoted, popularized and marketed the Skurfer throughout the 80s. The Skurfer was the newly designed surfboard with foot straps.

The only problem with this design was that it was very narrow and also because a lot of energy was required in order to get it up and planing on the surface of the water it meant that only very skilled surfers were able to participate in the sport.

The sport continued to grow and become more and more popular over time, and in 1990 there was the design of the Hyperlites, which had the overall shape of a surfboard with an obvious tip and tail. One of the most important moments in the history of wakeboarding took place in the year 1992 after World Sports and Marketing, a Florida-based sports promoter and event organizer, began staging pro wakeboard events.

As the sport has evolved it has become truly amazing to watch. Just jumping the wake is a thing long lost in the past. Now wake boarder’s are many feet in the air performing acrobatic tricks as they soar way beyond the boundary of the boat’s wake.

This was really when the sport of wakeboarding began to get popular and more and more people began to take a serious interest in it. Today there are many different tricks that can be performed in the sport, including:
* Raley
* Fakie
* Butter Slide
* Surface 360
* Tantrum
* Backroll
* Frontroll
* Half-cab
* Tootsie Roll
* Blind Judge
* Scarecrow
* Bel Air

Whether you are a professional wake boarder or participate in the sport purely for fun, the history of wakeboarding is beneficial to you because you should always know about those who took the risks of pioneering something you enjoy daily. Without them you would still be waterskiing.