Eleven Most Beautiful Cathedrals in Europe

Europeans took the worship of God very seriously and it’s demonstrated in the fantastic cathedrals you see wherever you go. There is at least a small church in every village, and often times you’ll be surprised by something even bigger. In larger cities you’ll definitely find more than one. There are so many that sometimes it’s hard to determine which ones to see and which to skip. Here are a few that shouldn’t be missed. 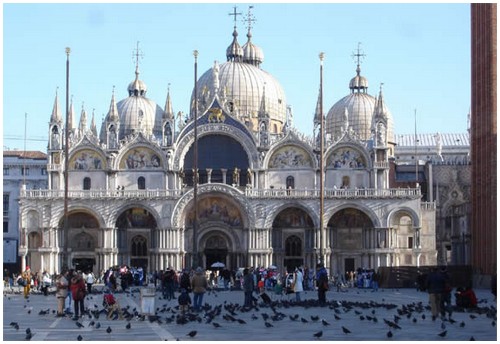 This unbelievable cathedral sits just off the Grand Canal in Venice on Piazza San Marco. The construction of the present church was begun in 1063 and the Byzantine style reflects an East meets West flair. In fact, any ships returning from abroad were required to bring back a precious gift for the church.

Across the front of the church is a series of high arches, and the main entrance is covered with intricate Romanesque carvings. Directly above the entrance you’ll see four life-sized gilded bronze horses, copies of the originals that were brought from Constantinople in 1204. You’ll find the originals protected inside the museum. Spires and five huge domes grace the roofline.

Inside, everywhere you look you’ll find golden mosaics depicting scenes from the Old and New Testaments. The floor is literally covered (45,622 sq. ft.) with colorful mosaic tiles that swirl and intertwine to show incredible pictures of birds and animals. It’s truly a gift for your eyes. 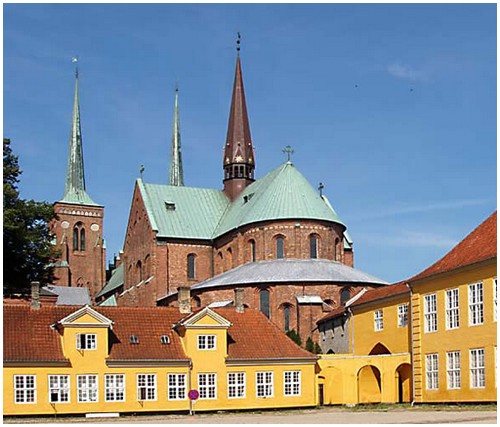 Located on a ridge in the center of Roskilde, this cathedral has been a UNESCO World Heritage Site since 1995. It was built in the 12th and 13th centuries and has the significance of being the first Gothic style cathedral built out of brick. The Danish royal family has been buried here since the 15th century.

The inside of the original cathedral was not large enough to accommodate specific altars for saints, so separate chapels have been added on to the original building. These additions show the interesting development of architecture in Denmark over a period of 800 years.

The cathedral is an active parish church and when services and other ceremonies are occurring, it is closed to tourists. 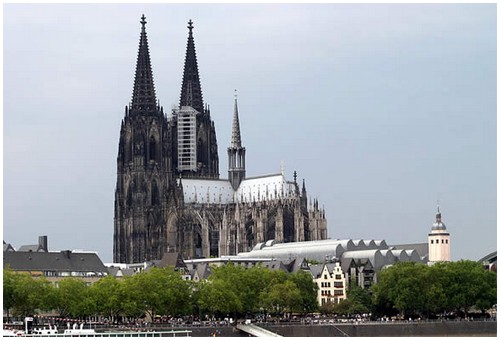 This cathedral has been a UNESCO World Heritage Site since 1996, and was added to the “World Heritage in Danger” list in 2004. It is the largest Gothic cathedral in Northern Europe and from 1880-1884 was the tallest building in the world.

During World War II the cathedral was hit by bombs 14 times, and sadly, used as a rifle range by American troops. It underwent extensive repairs that were completed in 1956. Other renovations continue to present day.

The cathedral is a major pilgrimage site for people coming to see its most famous treasure – a large, gilded sarcophagus believed to hold the remains of the three wise men from the biblical story of the birth of Jesus. 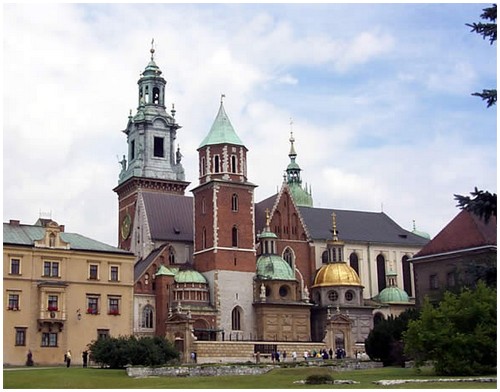 Wawel Cathedral was constructed in the 14th century and remains mostly unchanged today. Pope John Paul II was a priest and later archbishop of Krakow from this church before becoming Pope.

Inside the church you’ll find 18 different chapels containing beautiful works of religious art. In side chapels you’ll find the tombs of all, except four, of Poland’s 45 rulers.

You’ll want to visit Sigismund Chapel, easily identified by its golden dome. Climb the wooden steps to the top of the tower to see the Zygmunt bell, which is 350 years older than Big Ben in London, and rung only on very solemn state and church occasions. 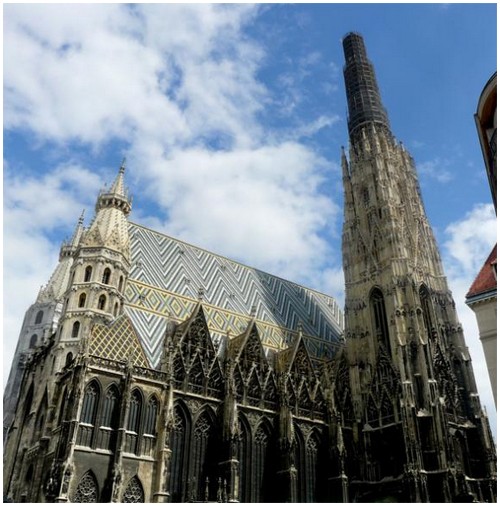 This cathedral sits in the center of busy Vienna. It was first constructed in the 12th century, but has undergone major reconstruction and repairs over the years due to various fires and sieges of war.

The exterior design of the church is Gothic, and the roof is a very colorful diamond-pattern constructed out of tiles that were donated by local citizens in 1950. If you can do it, climb up the 343 steps to the top of the Alter Steffi tower where you’ll enjoy incredible views of Vienna.

A bit of trivia: Mozart was both married and had his funeral at this church. You may want to take a tour to learn other historic bits of information about both the cathedral and the catacombs that lie beneath. 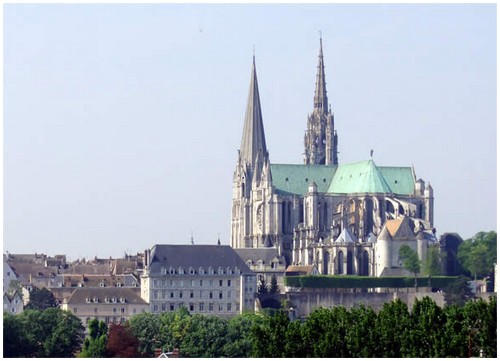 About 50 miles southwest of Paris, you’ll discover this amazing French Gothic cathedral which was built from 1194-1260. Very little has been done to alter it over the centuries and it stands proudly in its almost original state.

Inside you’ll be awestruck by the incredible, vibrant jewel tones of the stained glass windows, one of the most complete collections of medieval stained glass in the world; the nave which is known as the widest in France; and the stone floor with its labyrinth pathway, dating back to 1200, used by monks and pilgrims as a form of walking meditation.

Over the centuries this church has been at the center of the town serving as market place, hospital, a place of celebration and of worship. You can catch a tour to learn more about its history at 12:00 and 2:45 every day except Sunday. 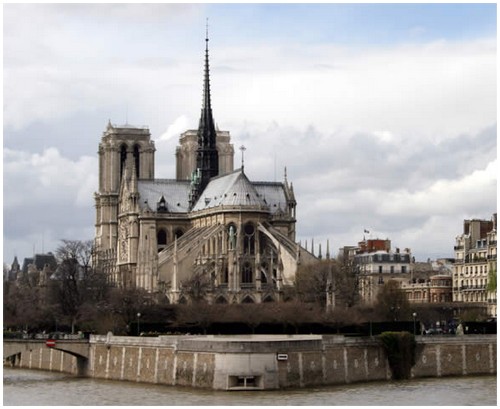 Notre Dame, which means “Our Lady” in French, was constructed from 1163-1345. It’s a French Gothic building that had several different main architects work on it throughout the building process. You can see their different styles reflected in the construction, especially on the front of the church and in the towers of the building.

The cathedral suffered damages during two different periods of history. The first was in 1793 during the French Revolution when many of the sculptures were destroyed and some of the treasures were stolen. Then in 1871 there was another uprising and part of the church was set on fire. Since then the cathedral has been restored.

When you visit make sure to take in the 13th century stained glass windows, including the enormous West Rose Window; the South Tower and its 28,000 pound bell; the Grand Gallery where all of the famous gargoyles can be viewed; and the three portals of the Last Judgment, St. Anne, and the Virgin. 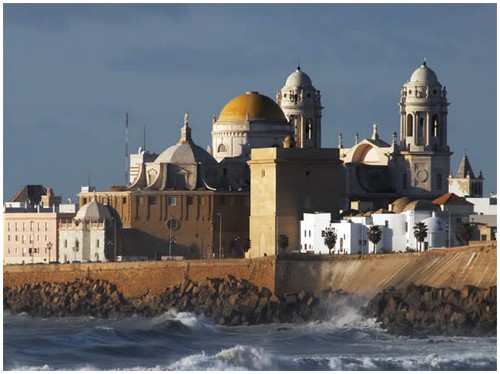 This more recent cathedral was constructed from 1776-1892. It was originally designed in the High Baroque style, but after passing through the hands of several different architects the finished product reflects the neoclassic style.

The exterior of the church is constructed entirely of stone with a large faux-gold tiled dome. You can climb up to the top of the dome for a fabulous view of the sea.

Inside you’ll discover many interesting sculptures and various paintings and relics that have been collected from throughout Spain. 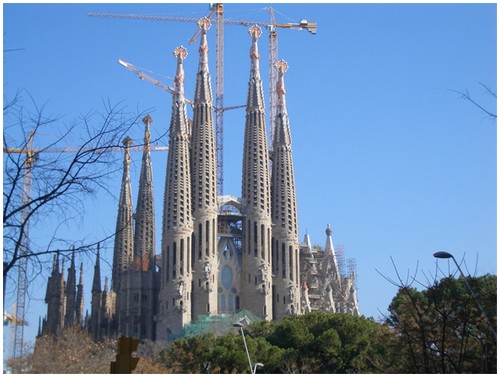 This incredible church is still a work in progress and hopefully will be completed by 2026. The work on the church began in 1882 and from 1883-1926 Antoni Gaudi was the main architect. Since his death many other architects have helped with the project, but they have all honored Gaudi’s modernist ideas.

The design is steeped in Christian symbolism. There are 18 bell towers which symbolize Jesus, the Virgin, the four evangelists and the twelve apostles. The interior symbolizes Jerusalem, various Christian cities and continents of the world, and again the apostles.

Over 2 million people visit the site per year. If you visit you can go into the crypt where Gaudi is buried, visit a museum that explains the history of the church, and climb up to the top of a tower to enjoy a spectacular view of Barcelona, although this is not recommended for anyone with a fear of heights or claustrophobia. 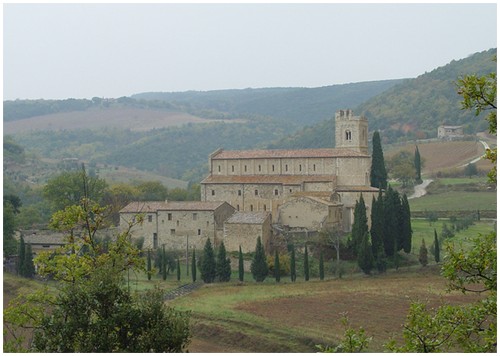 This abbey is a simple 12th century Romanesque style church that sits in a country valley of olive groves and vineyards. You won’t find gilded-gold domes, vivid stained glass windows, or colorful mosaic tiled floors. But, you will find an auditory treasure like no other.

Plan your visit around the monks chanting their prayers. They chant every couple of hours and each chant lasts about 10 minutes. Sit quietly on the wooden benches with your eyes closed and let the perfect sound of their voices lead you to a peaceful place. It’s truly a beautiful experience.

When the monks are done with their prayers they are always happy to talk to visitors. Ask them questions, wander the grounds, and enjoy a walk up to the bell tower. 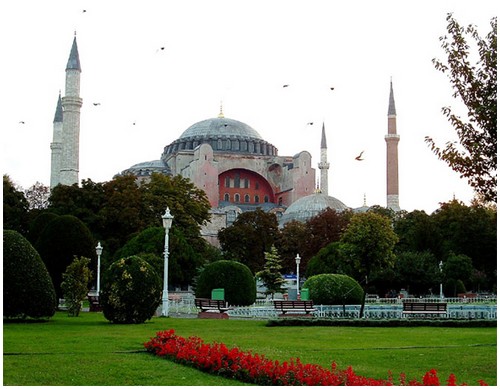 Hagia Sophia has been a UNESCO World Heritage site since 1985. It was built in 537 and for 1,000 years it was the seat of the Eastern Orthodox Church and the largest cathedral in the world. In 1453, the city was conquered by the Ottomans and at that time it was converted into a mosque.

The architecture of the cathedral is Byzantine, with the most prominent exterior feature being the enormous center dome (102 feet in diameter.) At various times in history, earthquakes have caused the dome to crack, and in 558 it totally collapsed and was rebuilt.

In 1935 Hagia Sophia became a museum, inside you’ll see incredible Christian mosaics that were plastered over during the Ottoman period and are being uncovered and restored; marble treasures including a large marble door and enormous jars; and the Sultan’s Lodge which has a carved marble screen that he was hidden behind.