Are you into extreme sports? Whether you’ve actually partaken or just have a macabre fascination, extreme sports (also known as “X Games”) are the most entertaining of all sports – and at times the craziest (or dumbest depending on your opinion). Even if you think some of these people are crazy or downright stupid, you have to watch. There are roughly a hundred extreme sports that I’m aware of, but I’ve come up with a great list of the most brutal of them all. 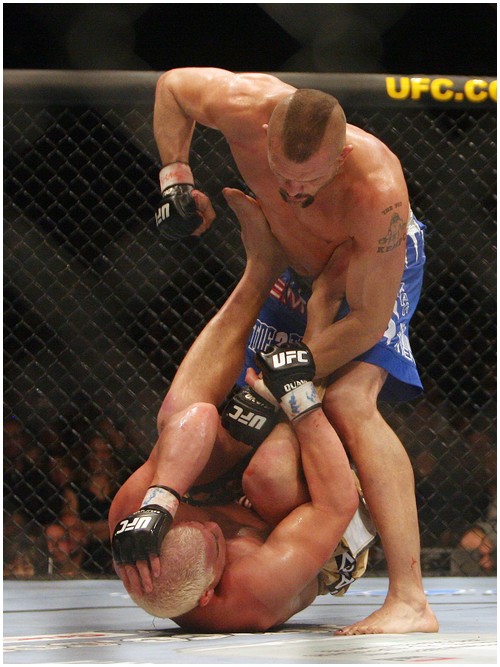 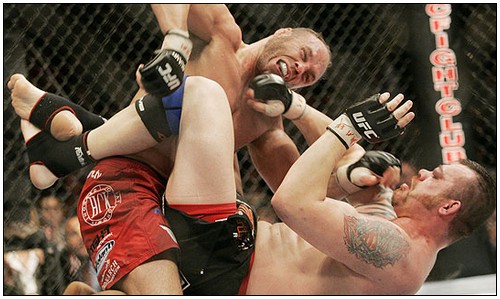 Ultimate fighting usually refers to one huge annual event called the UFC (Ultimate Fighting Championship). The organizers use to promote this event by calling it “no hold barred” fighting and it was pretty much the truth as is there were basically no rules. People would enter the ring and more times than not the loser would leave the ring on a stretcher – or worse! It didn’t take long before politicians stepped in and said it was too brutal and even called it “human cock fighting”. This probably wasn’t far from the truth. So they had to stop the production. Of course, the sport itself continued, but not legally until the organization altered the rules.

Today the UFC is very different from before it was modified, but it’s still brutal enough to hold your attention. The organization no longer calls it “no holds barred fighting” but instead refers to it as “mixed martial arts” or MMA. 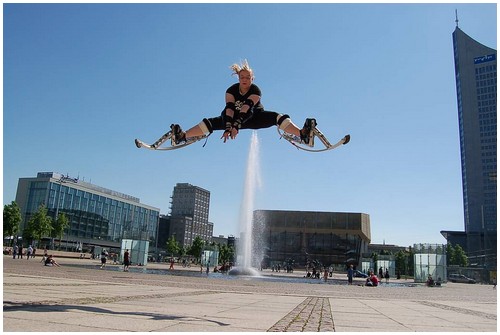 This is an up and coming extreme sport where you wear these things on your feet that are sort of a cross between low stilts and pogo sticks. The idea is to do stunt with them. It sounds a little boring until you see it. 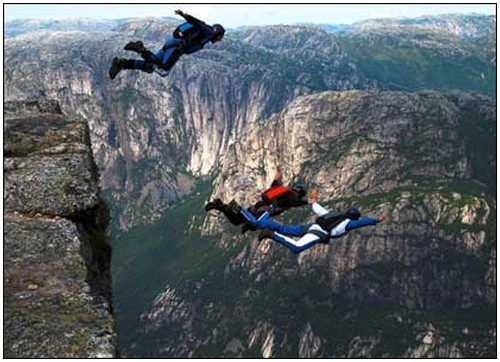 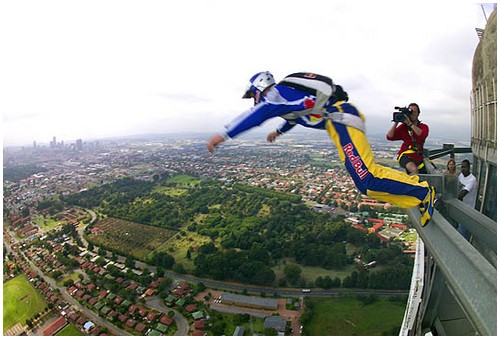 BASE (Building, Antenna, Span, Earth) jumping is where you jump from fixed objects such as cliffs and mountains with the aid of a parachute or a parachute and a wing suit. This extreme sport was derived from skydiving, but is more dangerous because its typically performed at much lower level giving you less of a window to open your parachute. Also, a BASE jumper travels at a lower speed which gives them less aerodynamic control tan skydivers. 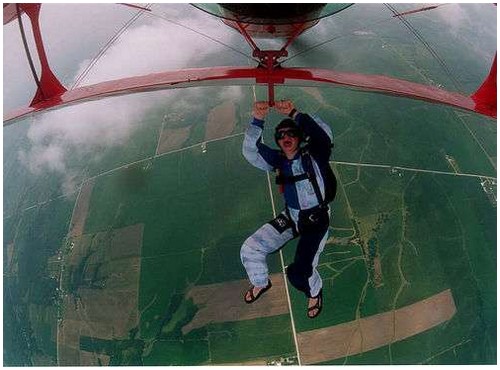 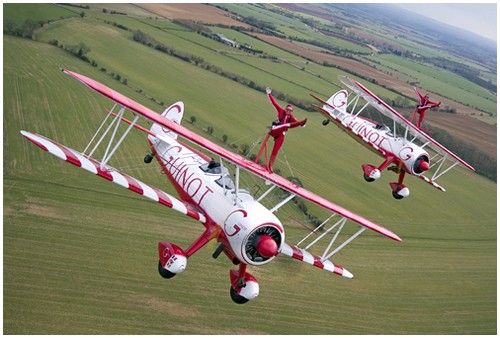 I’m not so sure that wing walking would qualify as a sport as much as it is a stunt, but it’s certainly “extreme”. Some people do refer to it as an extreme sport and it’s extremely dangerous, so it made the list. Wing walking is the act of walking out onto a wing of an airplane while it’s in the air. This actually didn’t start as a sport, but as a necessity as the first wing walker, Omer Locklear walked out on a wing with the airplane in flight during World War I to repair some damage.

I guess after that, people saw it or heard about it and said, “Hey wouldn’t that be fun”. Hell, no! But we have enough crazies that do think it’s fun and it doesn’t stop the rest of us from watching. We now see wing walkers at air shows doing stunts such as handstands and hanging by their teeth! 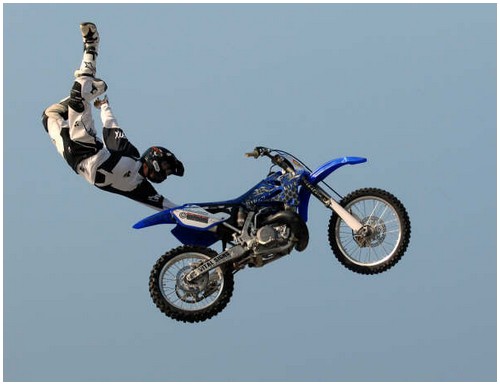 Freestyle motocross (or FMX) is the sport in which you use a motorcycle for stunts and tricks such as flips, like the back flip, double back flip and the whip flip. This has increased in popularity throughout the years, but the sport is very dangerous and if it’s one that you plan to partake in, you also should plan on getting some broken bones. 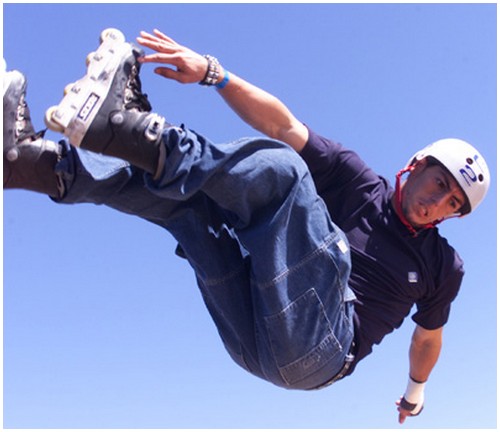 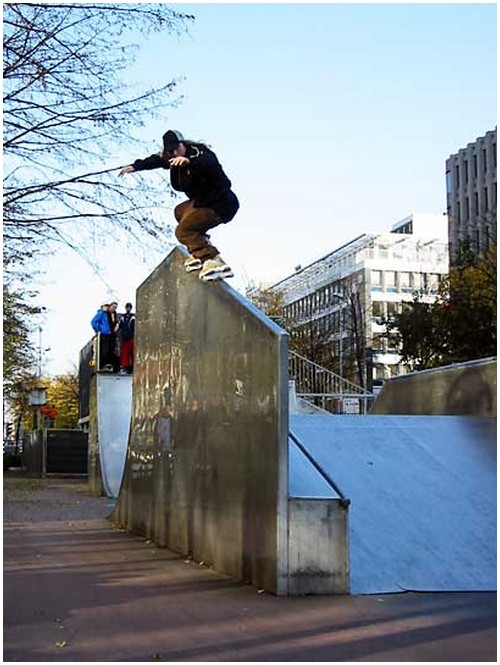 Aggressive inline skating is a sport where stunts and tricks are done on inline skates. It’s sort of a take off on the stunt skateboarding, but the people use inline skates instead. Give some people wheels and a shoe and they go crazy! This actually looks like a lot of fun and they do some crazy stuff. 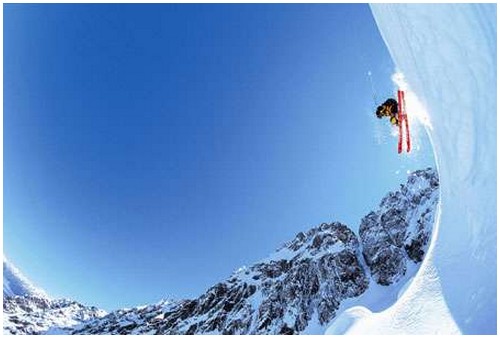 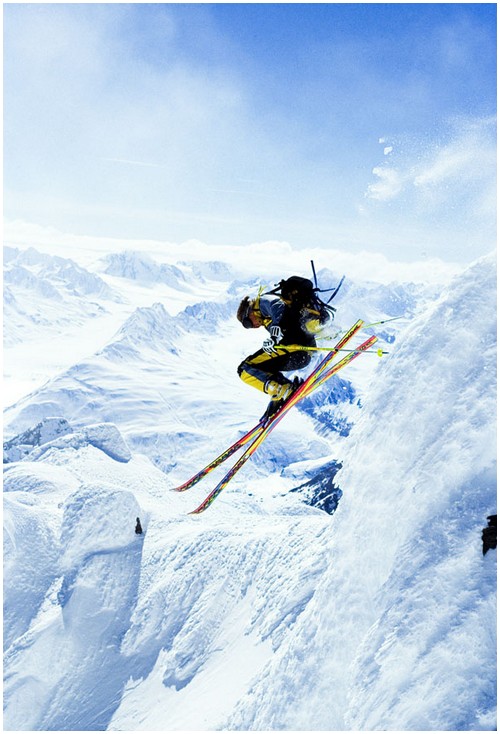 The name says it all. This is a form of skiing where the skier goes down very steep hills or on rough terrain. This is awesome to watch and it looks like it would also be great to try, but you know what they say. It’s always fun until someone gets hurt. 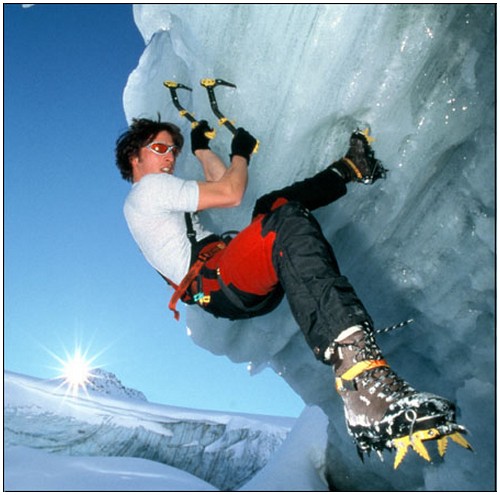 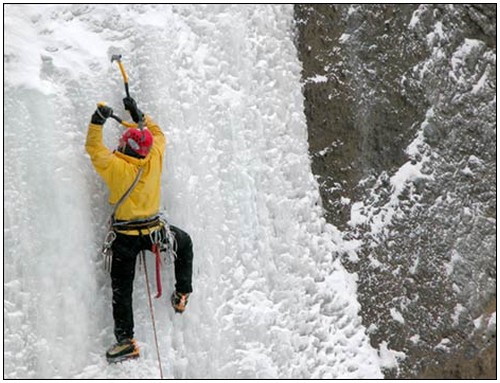 I definitely wouldn’t have thought to try this one. It takes a special kind of person to look at an ice foundation such as a frozen waterfall or a mountain covered in ice and say, “Gee, I’d really like to climb that”. The cold, frigid truth is that people find a lot of adventure in this. I guess they’ve never heard of global warming. 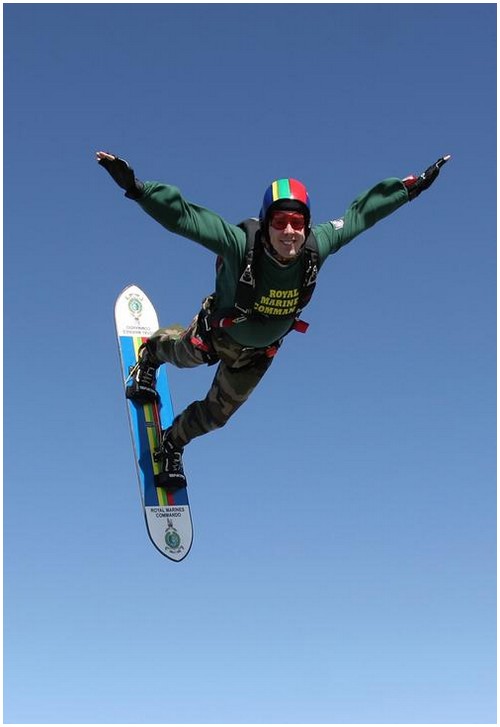 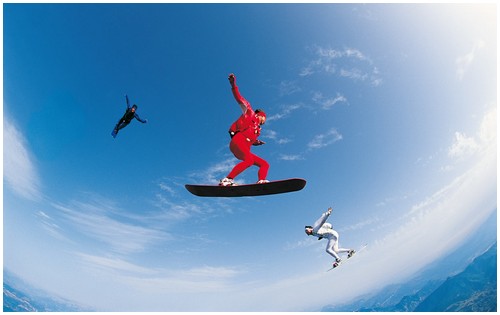 I’d like to know what genius thought that it would be a good idea to take their surfboard and jump out of an airplane with it. I just picture some drunk surfer saying to his buddies, “Dude, I wonder how big the waves are up in the sky”. From this, the most sober of them all invented sky surfing. In reality, it’s a type of skydiving where a board is strapped to the diver’s feet. They usually do stunts or acrobatics on it on the way down. 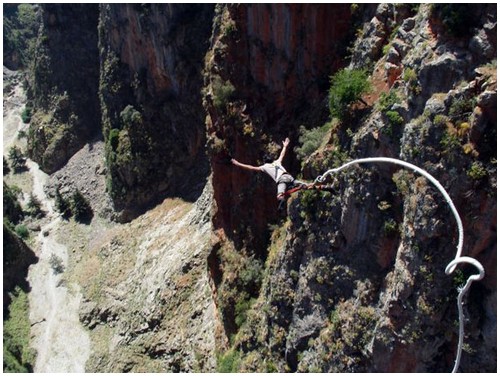 We all know what bungee jumping is. It’s when you jump off of a tall fixture tied to a large rubber band and hope to God that it doesn’t break! This, of course has been very popular for years and there have been a lot of accidents associated with bungee jumping, but there also has been a lot of success. 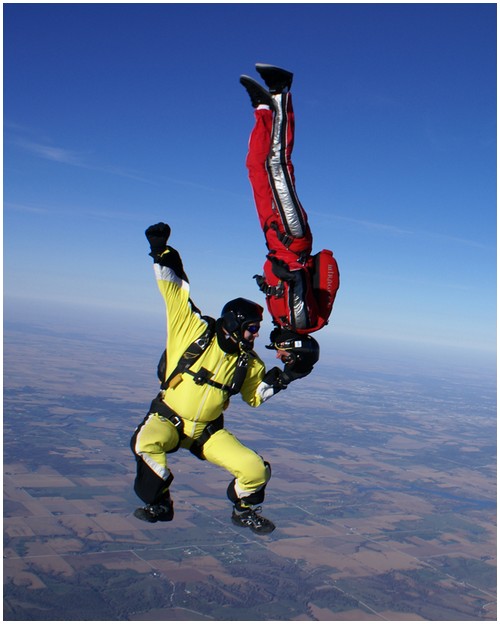 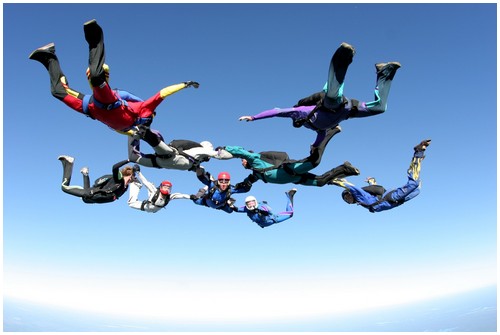 Skydiving has been around since before the airplane, believe I or not. In fact, it goes way back to the end of the eighteenth century when a Frenchman by the name of André-Jacques Garnerin made the first parachute and jumped out of a hot air balloon with it in 1797. Of course, in World War I, skydiving was used in their missions. As we know, skydiving is still very much existent in our military today.

We also have tons of thrill seekers who enjoy the sport of skydiving and he even have stunt people that perform variation of the sport in air shows. 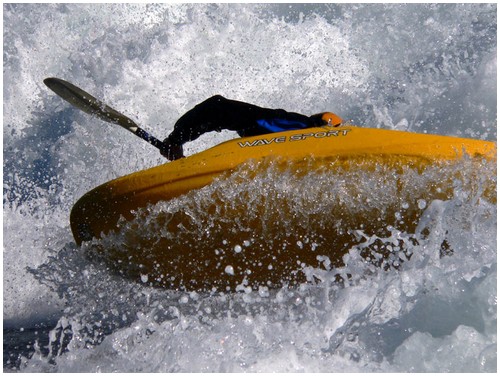 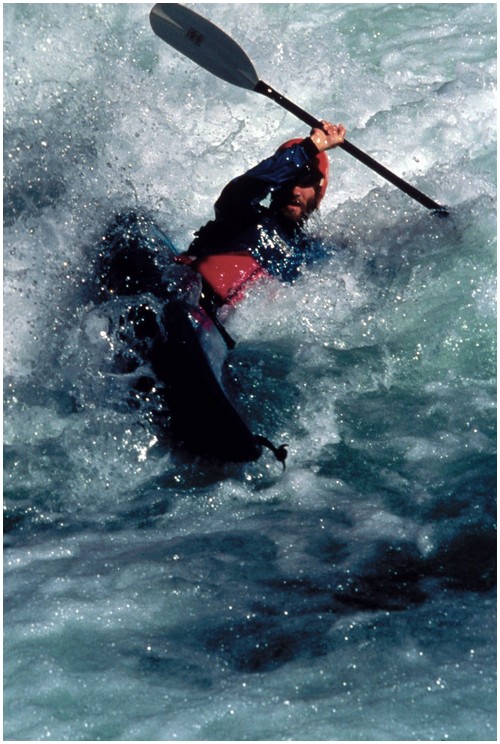 When done right, this can be a very dangerous sport. Imagine that you’re in a river with extremely rough water and the only thing you have to protect you is a small layer of fiberglass surrounding you and you somehow have to control it. Of course, there are degrees of the severity of the current of a river, so rivers are divided into “classes” to denote the severity. This is why I say that it’s very dangerous if done right!

These are the extreme sports that I found to be the most interesting and dangerous. Some are fairly new and others have not only stood the test of time, but been improved upon over the years. In general, I’m not so sure that extreme sports should even be classified as sports, but rather craziness. Most of us have tried at least some extreme sports, including myself. Therefore, I think it’s safe to say that we all have a little bit of craziness in us.
source: here