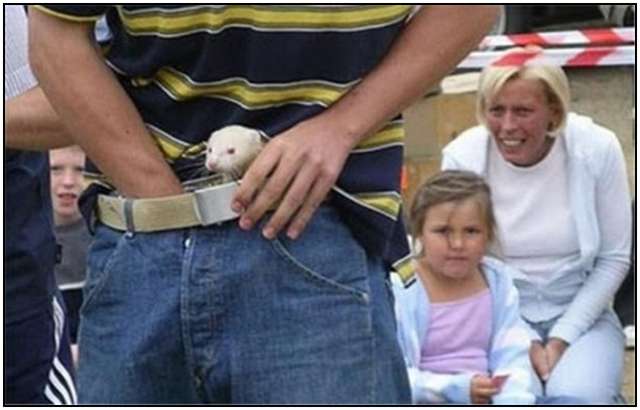 Before the promulgation of worthwhile American sports such as baseball, football, basketball or hockey*, non-Americans were forced to content themselves with quasi-sports like croquet, Duck-Duck-Goose and soccer.  It’s no surprise then that these diversion-starved people began to invent their own increasingly bizarre ‘sports.’

However, the Yorkshire miners who in the 1970s invented ferret legging, also known as ferret-down-trousers, had no such excuse.  Although week after week, color television offered far safer and more athletically meritorious sports, the Yorkies designed a contest that very often results in bleeding genitals.

The rules of ferret legging are simple: participants trap ferrets in their pants and then see who can endure the longest as the needle-toothed weasels fight for trouser real estate.  Underwear is not permitted, and the pants must be such that the furred Slinkies can pass from leg to leg with ease.

Considered a dying sport, ferret legging has sought mightily to remain relevant in an age of much cooler sports.  Despite the hazards of a severed scrotum or perforated penis, ferret leggers take solace in the knowledge that however wretched their sport may be, it will always be a step above competitive eating.