The Tower of London – a Fascinating Visit 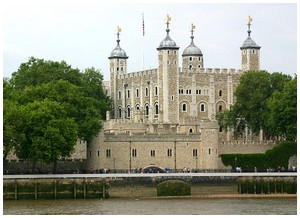 In the early 1080s, William – the one who conquered Harold, with an arrow in his eye – started to construct a huge stone tower at the centre of London. Nothing so grand had ever been seen before. And over time, it grew wven larger, as each succesive king and queen added to it.

William, Duke of Normandy invaded and defeated the English under King Harold at the Battle of Hastings. Realising he must next secure England’s most powerful city – London – he did not attack directly but first laid waste to the surrounding countryside. An advance guard went to London to construct a fortress and prepare for his triumphal entry into the city.

After his coronation in Westminster Abbey on Christmas Day 1066, the new king withdrew to Barking in Essex, while several strongholds were made ready in the City to safeguard against the fierce population. Historical evidence makes us think that one of William’s strongholds was in the south-east corner of the Londinium Roman city walls, on the site where the Tower of London was constructed. These early defences were replaced with a great stone tower (the White Tower) proclaiming the physical power and prowess of the new Norman monarch.

Henry VIII (1509-47) continued the work begun on the royal residential buildings by his predecessors, but on a grander scale. He commissioned a large range of timber-framed lodgings, primarily for the comfort and enjoyment of his second wife, Anne Boleyn, ready for her coronation in 1533, but they were rarely used and from this point on, the Tower ceased to be an established royal residence.

Henry VIII’s decision to break with Rome swelled the Tower’s population of religious and political prisoners from the 1530s onwards, while the country had to adjust itself to their monarch’s new role as the Supreme Head of the new, Protestant, Church of England. Prisoners included Sir Thomas More, Bishop Fisher of Rochester and two of Henry’s wives. All four were executed.

Henry’s daughter, Mary, (1553-8) returned the country to Catholicism and her short reign saw many rivals and key Protestant figures imprisoned at the Tower.

As the centuries went by, the tower fell into disrepair. Action was taken under the invigorating leadership of the Duke of Wellington, Constable of the Tower from 1826 to 1852, to restore the tower. The place was cleaned up and the moat, increasingly smelly and sluggish, was drained and converted into a dry ditch by 1845. Work began on a huge new barracks, constructed to accommodate a thousand men – on the site of the Grand Storehouse destroyed by a fire in 1841 – commenced. On 14 June 1845 the Duke laid the foundation stone on the barracks named after his greatest victory – Waterloo.

The Tower’s defensive role lessened as time went by, and the last time the Tower exerted its traditional role of asserting the power of the state over the people of London was in response to rallies and disturbances in London in the 1840s supporting Chartist demands for electoral reform. More defences were constructed, including a huge brick and stone bastion that finally succumbed to a Second World War bomb, but the Chartist attack never materialised.

It was also at the beginning of this century that many of the Tower’s historic institutions departed. The Royal Mint was the first to move out of the castle in 1812, followed by the Menagerie in the 1830s, which formed the nucleus of today’s London Zoo. The Office of Ordnance was next to leave in 1855 and finally, the Record Office relocated in 1858.

The way the Tower looks today is largely thanks to a 19th-century fascination with England’s turbulent and sometimes gruesome history. In the 1850s, the architect Anthony Salvin, a leading figure in the Gothic Revival, was commissioned to restore the fortress to a more appropriately ‘medieval’ style, making it more pleasing to the Victorian eye – and imagination. Salvin first transformed the Beauchamp Tower to make it suitable for the public display of prisoners’ graffiti, refacing the exterior walls and replacing windows, doorways and battlements.

Further commissions included restoring the Salt Tower (completed 1858) and making alterations to the Chapel of St John in the White Tower in 1864. Salvin restored the Wakefield Tower, so that it could house the Crown Jewels, which remained there until 1967, and built the bridge between it and St Thomas’s Tower. This he also restored so that the Jewel House Keeper could live there. In the drive to complete the perfect ‘medieval’ castle, his successor, John Taylor, controversially destroyed important original buildings to create uninterrupted views of the White Tower and to build a new southern inner curtain wall on the site of the old medieval palace.

So today’s tower is very much a Victorian version of the Tower, but it still holds a lot of interest – as hsown ny the fact that it attracts over a million visitors each year.