The Discovery of Machu Picchu 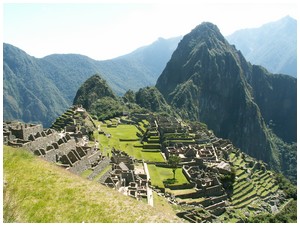 The discovery of Machu Picchu was actually the unintentional consequence of the search for Vilcabamba – a town established by the rebellious Inca Manco Capac II after Peru was invaded by the Spanish. From this town, the remaining Incas would attack the Spanish settlers in Cusco for the following 36 years. But in 1572, the Spanish invaded the troublesome settlement, and executed Manco Capac’s successor ending the Incan dynasty. The location of this legendary settlement was forgotten – living on only in a few vague maps and clues left by future generations.

In 1909, 337 years after the last of the Incas was killed, Doctor Hiram Bingham from Yale University visited Peru and became fascinated by the legendary settlement and vowed to return in search of it. In 1911, he returned with seven others sponsored by Yale University and the National Geographic Society. In July, Bingham and his team set off on their explorative Inca trail trek and very quickly stumbled upon a settlement that they christened Patallacta (and sometimes called Llactapata).

A week into the expedition, Bingham and his team camped at Mandorpampa (now Aguas Calientes) and spoke to the owner of a local hacienda, Melchor Artega. He told the group of some fine ruins up in the mountains, and agreed to accompany Bingham the next day. When Artega and Bingham reached the top of the mountain (the others passed on the trip due to heavy rain!), they were amazed to be met by two locals evading the police and taxes, Toribio Richarte and Anacleto Alvarez, who led them to the ancient site.

The discovery of Machu Picchu left Bingham “truly breathless” according to his book, but he wrongly inferred that the site was the legendary settlement of Vilcabamba that he had previously set off in search of! The following year, Bingham returned to the site to begin clearing the ruins of overgrowth and vegetation, and three years later the site stood as it does today. A railway link was constructed in 1928 and roads to the ruins were finised in 1948. It eventually reached World Heritage Site by UNESCO in 1983.

Years before this, in 1964, Bingham’s mistake had been discovered – this was not the ruins of Vilcabamba which were discovered some 5 kilometres further along by Gene Savoy. Ironically, Bingham had actually passed through the site in his original 1909 visit but considered the ruins unimportant!

What Was Machu Picchu and Why Was It Abandoned?

There are several theories about what Machu Picchu symbolised, now that most people agree it isn’t Vilcabamba as Bingham theorised. These all centre around the archeological belief that Machu Picchu was abandoned before the Spanish arrived (how else would it have avoided being destroyed by them?)

– It was the ceremonial centre of a large region and possibly the ‘royal estate’ for the Inca Pachacutec and his family clan. Its sacred position (in Incan terms) between mountains and rivers lends credence to this. This would mean that for many a trip along the Inca trail to Machu Picchu would have been a religious pilgrimage!

– It was the location where the first Incan, Manco Capac, emerged from a sacred cave.

Obviously it can’t have been all of these, but it’s interesting that it causes such debate to this day.

And why was it abandoned? Some say the death of Pachacutec will have caused a new royal estate to be built for the next leader; others say that the water supply simply dried up.

Whatever you believe, an Inca trail trek remains an unbeatable cultural experience and one that should be on every traveller’s checklist. If you haven’t followed the Inca trail to Machu Picchu yet, you should consider visiting and discovering the secrets of the Incas for yourself.