Clouds fill the skies above us and are part of our every day lives, often going unnoticed. However, there are some clouds that are so rare that you will be very lucky to see them in your lifetime. 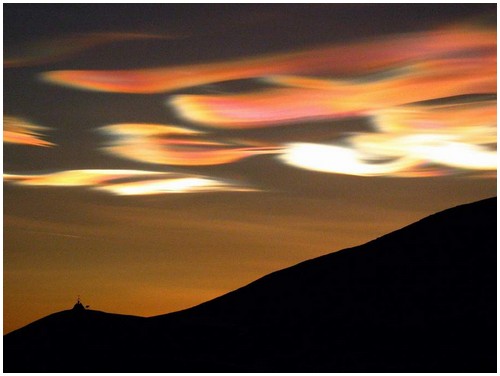 These rare clouds, sometimes called mother-of-pearl clouds, are 15 – 25km (9 -16 miles) high in the stratosphere and well above tropospheric clouds.
They have iridescent colours but are higher and much rarer than ordinary iridescent clouds. They are seen mostly but not exclusively in polar regions and in winter at high latitudes, Scandinavia, Alaska, Northern Canada. Lower level iridescent clouds can be seen anywhere
shine brightly in high altitude sunlight up to two hours after ground level sunset or before dawn. Their unbelievably bright iridescent colours and slow movement relative to any lower clouds make them an unmistakable and unforgettable sight. 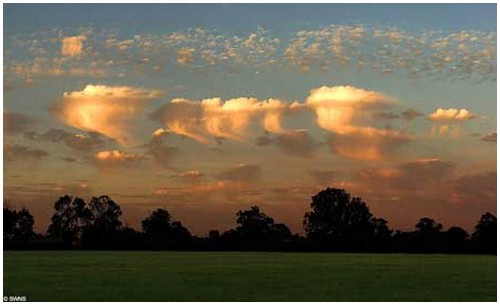 Also known as jellyfish clouds due to their jellyfish-like appearance.
These formed around 17,000 ft due to when the rush of moist air comes from the Gulf Stream and gets trapped between layers of dry air. The top of the cloud rises into a jellyfish shape and long tentacles known as “trailing virga” form from rain drops that have evaporated. 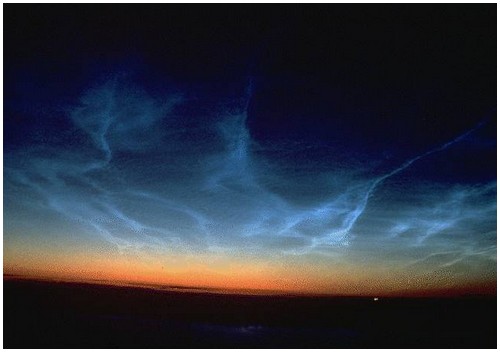 Noctilucent Clouds or Polar Mesopheric Clouds: This is an extroadinarily rare cloud formation that occurs out on the verge of space between 82km to 102 km from the earth’s surface.
Noctilucent clouds appear to be luminous yet they reflect the sunlight from the other side of the earth at night, giving them a glowing appearance 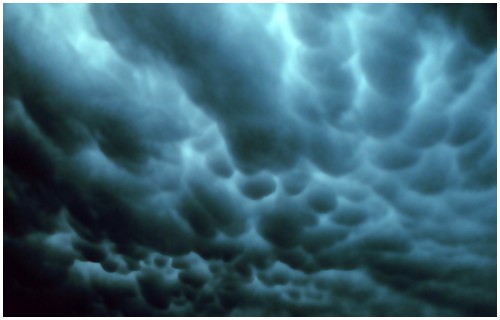 Mammatus are pouch-like cloud structures and a rare example of clouds in sinking air.
Sometimes very ominous in appearance, mammatus clouds are harmless and do not mean that a tornado is about to form – a commonly held misconception. In fact, mammatus are usually seen after the worst of a thunderstorm has passed. 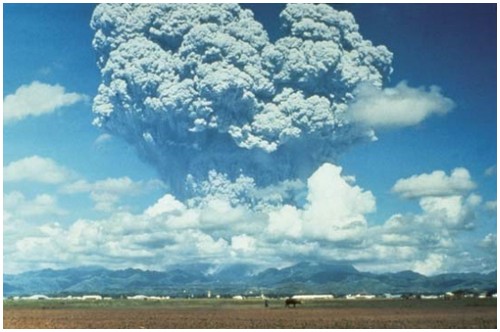 A mushroom cloud is a distinctive mushroom-shaped cloud of smoke, condensed water vapor, or debris resulting from a very large explosion. They are most commonly associated with nuclear explosions, but any sufficiently large blast will produce the same sort of effect.
Volcano eruptions and impact events can produce natural mushroom clouds.
Mushroom clouds form as a result of the sudden formation of a large mass of hot low-density gases near the ground creating a Rayleigh-Taylor instability. The mass of gas rises rapidly, resulting in turbulent vortices curling downward around its edges and drawing up a column of additional smoke and debris in the centre to form its “stem”. The mass of gas eventually reaches an altitude where it is no longer less dense than the surrounding air and disperses, the debris drawn upward from the ground scattering and drifting back down. 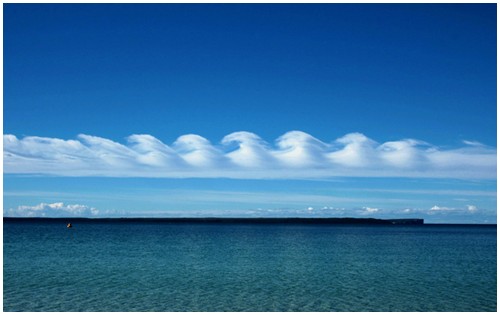 Appearing as a slender, horizontal spiral of cloud, cirrus Kelvin-Helmholtz is one of the most distinctive cloud formations. However, it tends to dissipate only a minute or two after forming and, as a result, is rarely observed.
Average height is around 16,500 ft. 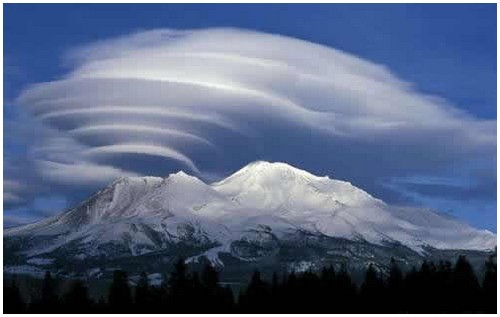 Lenticular clouds, technically known as altocumulus standing lenticularis, are stationary lens-shaped clouds that form at high altitudes, normally aligned at right-angles to the wind direction.
Where stable moist air flows over a mountain or a range of mountains, a series of large-scale standing waves may form on the downwind side. Lenticular clouds sometimes form at the crests of these waves. Under certain conditions, long strings of lenticular clouds can form, creating a formation known as a wave cloud. 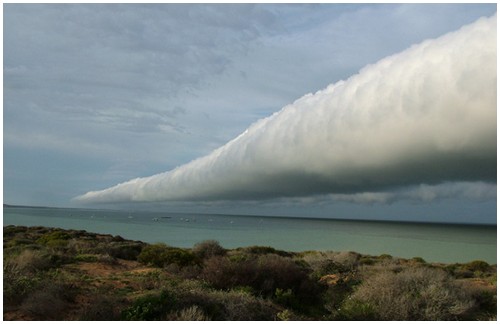 A roll cloud is a low, horizontal tube-shaped arcus cloud associated with a thunderstorm gust front, or sometimes a cold front. Roll clouds can also be a sign of possible microburst activity.
Cool air sinking air from a storm cloud’s downdraft spreads out across the surface with the leading edge called a gust front. This outflow undercuts warm air being drawn into the storm’s updraft. As the cool air lifts the warm moist air water condenses creating cloud, which often rolls with the different winds above and below (wind shear). 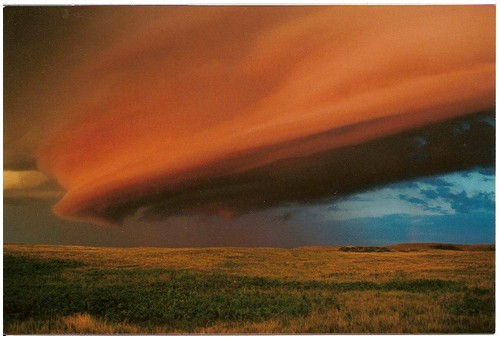 A shelf cloud is a low, horizontal wedge-shaped arcus cloud, associated with a thunderstorm gust front (or occasionally with a cold front, even in the absence of thunderstorms).
Unlike a roll cloud, a shelf cloud is attached to the base of the parent cloud above it (usually a thunderstorm).
Rising cloud motion often can be seen in the leading (outer) part of the shelf cloud, while the underside often appears turbulent, boiling, and wind-torn. 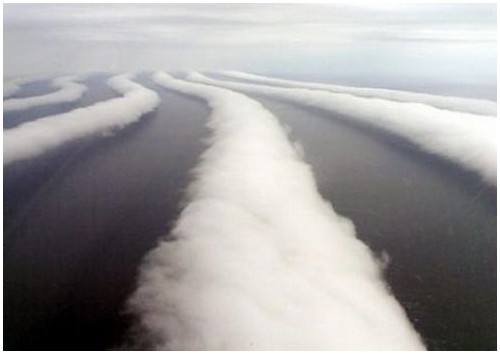