Fuji, the Dolphin with a Rubber Tail 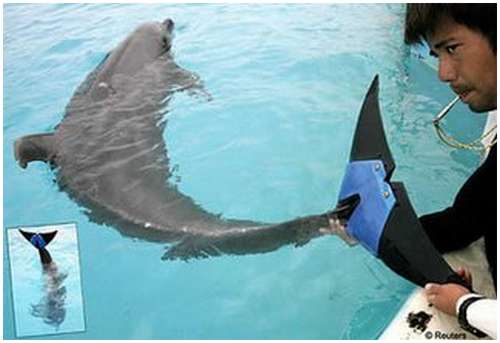 For decades, Fuji the dolphin had delighted children visiting an aquarium in Okinawa until a mysterious disease began eating away her tail fin. To save her life, almost all her tail fin had to be amputated.
A dolphin’s tail fin is its engine. Without it, dolphins can’t swim, jump or dive, so engineers from Bridgestone Tire Company worked to design a new rubber tail for Fuji. The first designs did not work properly or had some other drawback. Finally, Fuji accepted the third tail design, made of silicon rubber with a foam padding, and was able to swim almost as well as an intact dolphin.

Uzonka, the Stork with a Prosthetic bill 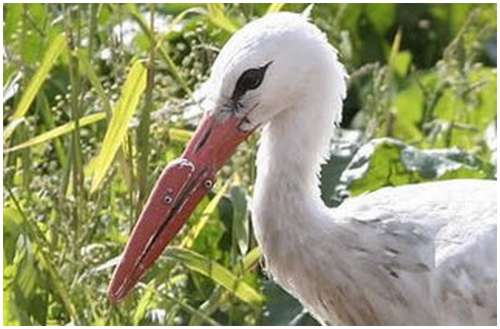 When a bird’s beak is damaged, it may not be able to eat, drink, or hunt properly and could die as a result. Uzonka the stork had her bill damaged by human assault. She received a prosthetic beak after five preparatory operations and is in the care of an animal hospital in Uzon, Romania.

Tonka, the Turtle on Wheels 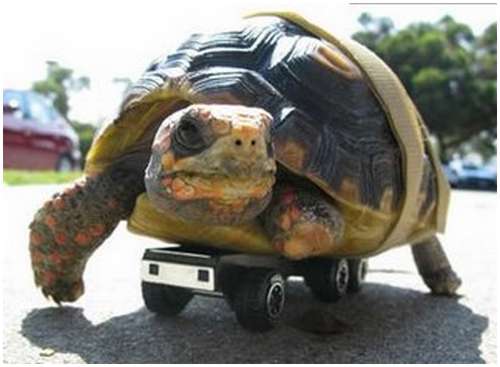 Tonka, a Bay Area Turtle, lost mobility after her legs were bitten by a dog, so Peninsula Humane Society workers fitted the three-legged tortoise with a set of toy wheels. Suddenly, Tonka was off a rolling! slowly of course. And then, in the next couple of days, when her picture showed up in the morning newspaper, she was adopted almost immediately.

Stumpy, the kangaroo with a Prosthetic Limb 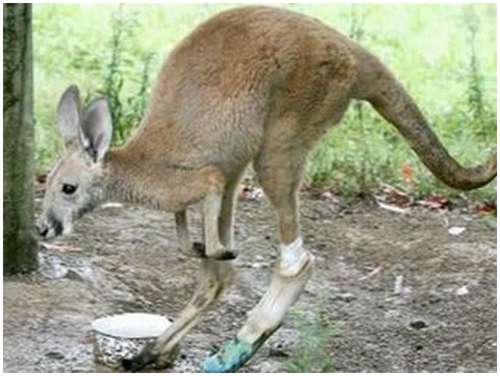 Stumpy the red kangaroo lives in Ohio, at the International Kangaroo Society’s sanctuary. She only has one leg. Veterinarians at Ohio State University created an artificial limb for her. Dr. David E. Anderson, Associate Professor of Surgery, Food Animal, of the College of Veterinary Medicine and Richard Nitsch, a licensed prosthesis orthotist for American Orthopedics, made sure it included a spring to replicate the natural movement of a kangaroo.

Motala, the elephant with a bag of woods 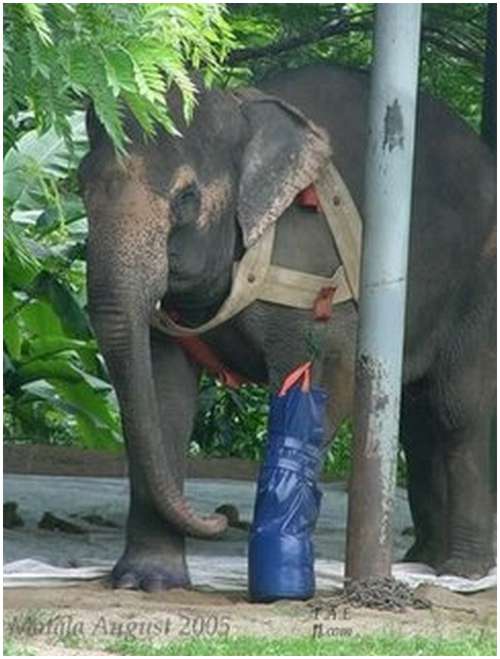 Motala the elephant stepped on a land mine near the Thai-Burma border in 1999. Veterinarians were able to repair her front leg, but it was left much shorter than the others. At Friends of the Asian Elephant’s hospital in Thailand, Motala began using a prosthetic leg in 2005. The prosthesis is a bag filled with wood shavings, which makes her damaged leg as long as the others. She accepted the attachment, and is still using the same kind of prosthetic leg.

Molly, the Pony With A Prosthetic Leg 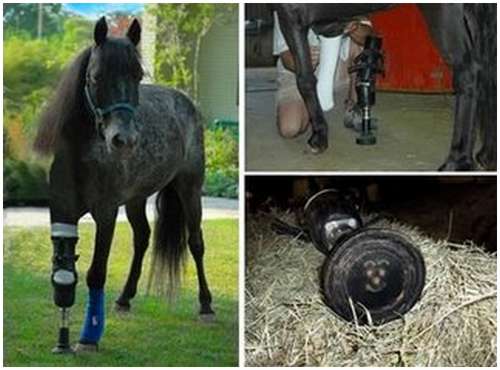 Meet Molly the pony. She’s a gray speckled pony who was abandoned by her owners when Hurricane Katrina hit southern Louisiana . Molly then spent weeks on her own following the 2005 catastrophe before finally being rescued and taken to a farm where abandoned animals were stockpiled. While there, she was attacked by a pit bull terrier and almost died.
Her right front leg was terribly damaged and became infected. Vets thought that was it and Molly looked to be on her way to the knackers yard, but then surgeon Rustin Moore met Molly, he changed his mind. He noticed how the pony was careful to lie down on different sides so she didn’t seem to get sores, and how she allowed people to handle her. Moore agreed to remove her leg below the knee and a temporary artificial limb was built. Molly walked out of the clinic under her own steam, and is now an inspiration for children… and horses around the world.