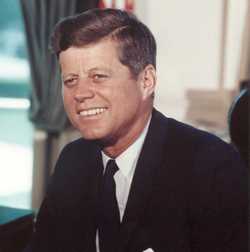 The names Lincoln and Kennedy each contain seven letters.

Both were particularly concerned with civil rights.

Both of their wives lost their children while living in the White House.

Both Presidents were shot on a Friday.

Both were shot in the head.

Both were shot with one bullet.

Lincoln was shot in the Ford Theater.
Kennedy was shot in a card made by the Ford Motor Company (a Lincoln no less)

Both were assassinated by Southerners. 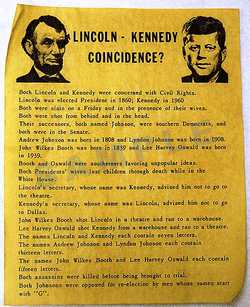 Both were succeeded by Southerners.

Both successors were named Johnson.

Both assassins were known by their three names.

Both assassins were assassinated before their trials.

Lincoln’s last child, Tad, had his funeral held on July 16, 1871. Later he was exhumed and moved to a different grave site.
Kennedy’s son JFK Jr. was lost at sea on July 16, 1999. Later he was found, brought up, and then re-burried at sea.

Note: 1 Note: It is an urban myth that Lincoln had a secretary named Kennedy. There is no record of that.

2 Note: There is no record whether or not Kennedy’s secretary warned him. 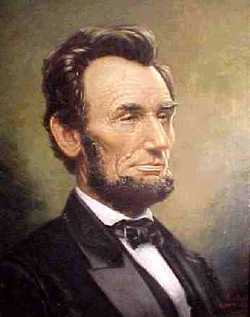 3 Note: Booth actually fled to a farm and was killed in a tobacco barn. It might be a stretch to call it a warehouse.

But two years after his death, Booth’s body was temporarily moved to a warehouse. Also, after the assassination, the government closed the Ford Theatre and turned it into a warehouse.

Other interesting facts:
Apparently Lincoln had a dream several days before the assassination that he had been killed.
He told his wife that he had seen himself in a casket.

Also, Lincoln’s son Tad had a pet turkey named Jack. Tad asked his father not to kill the turkey for Thanksgiving.
Although Harry S Truman started the official tradition, Lincoln was the first to “pardon” a Thanksgiving turkey.

Now what would be real interesting is if Kennedy had a pet named Abe or had pardoned someone by that name. Thus far, I haven’t heard of that. Skeptics disagree

Some skeptics say that you could take any two famous people and find a number of similar-type coincidences between them.
The only problem with that theory is that there really haven’t been any listings of such comparisons.
And certainly none has been as extensive as the Lincoln-Kennedy similarities.

Summary:
Facts concerning the assassination of Abraham Lincoln and John F. Kennedy are amazingly similar. It is uncertain if such coincidences have any meaning, but they certainly are strange.