King Of The Sea
Think there’s no mystery left in the world? These images from Under the Sea 3D (now playing in IMAX theaters) might change your mind. Directed by underwater filmmaker Howard Hall, the film involved more than 350 hours of diving and 110 days at sea, topped off by the task of transporting, assembling, and breaking down more than 8,000 pounds of specialized equipment. These images represent some of the best stills from the film.
This venomous species of lionfish was discovered only two years ago off the coast of Indonesia. A sting from any one of its 18 dorsal fins can cause nausea and breathing difficulties, though it won’t kill you. The lionfish uses its fins to back shrimp, crabs, and smaller fish into a corner, and then swallows the prey in one quick strike. The crew was able to nab this shot because the subject was busy at dinner.

Look At Me, I’m Beautiful
This breathtaking octopus, first discovered a few years ago, does a pinwheel-like somersault in the waters of Milne Bay, Papua New Guinea. The wunderpus most resembles the mimic octopus, though its white markings are unique to the species.
It was given the name Wunderpus photogenicus because the photographer and scientists found that the species could mimic most of its predators, including lionfish and mantis shrimps, as a means of defense.
Another unique trait is its elusiveness: It took the crew six hours to capture this shot.

I’m Ready For My Close-Up
Hiding among the rocks off the coast of Papua New Guinea, this crocodilefish proved dangerous when it lunged directly at the camera lens in pursuit of a blue chromis, a type of damselfish.
The crocodilefish gets its name from its flat head and intricate skin pattern that resembles a crocodile’s tough hide. The fish’s camouflage, including the iris lappets over its eyes, helps it sneak up on its next meal.

Enjoy It Now—It’s Going Fast
This gorgeously soft coral was shot in Papua New Guinea, part of a vast region known as the Coral Triangle, which encompasses the waters of Indonesia and the Philippines and extends as far as the Solomon Islands.
This area is home to approximately 40 percent of the world’s reef wildlife population, including more than 75 percent of coral species and some 3,000 individual species of fish, as well as sea turtles, mollusks, crustaceans, and marine mammals.
Unfortunately for coral reefs (and for us), they face a serious risk from climate change—experts estimate that as much as

Proceed With Caution
The venomous scorpionfish can be easily mistaken as part of the ocean floor. But beware its spiny head and body: Each spine is covered with venom that can seriously wound any creature that goes near it. Once injected, the fish’s venom can cause intense swelling, nausea, seizures, and paralysis—all of which meant that the divers needed to take care when approaching it.

Snuggled In The Coral
Seen here in the tropical waters near Papua New Guinea, anemonefish usually live where they are born. The species gets its name from the hue of its skin, as well as where it makes its home.
The anemonefish has to first acclimate itself to living with an anemone by adjusting to the anemone’s stinging tentacles, which protect the fish from predators.

You Lookin’ At Me?
This species, seen here at Dinah’s Beach in Milne Bay, Papua New Guinea, is twice the size of its California cousin. Its relatively small claws carry amazing power: One claw is strong enough to break the glass of an aquarium in a single strike.
This shrimp toyed with the film crew, faking an emergence from its den only to hurry back inside. They finally nabbed this shot when the shrimp came out to spear its dinner and quarrel with a cardinalfish. 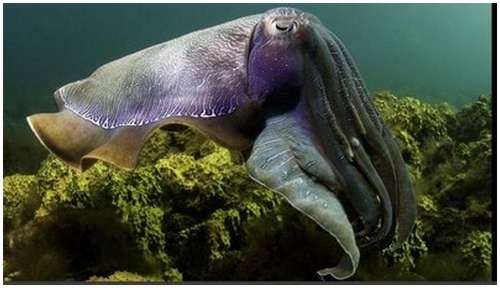 If Bruce Banner Were A Fish
Of the approximately 100 species of cuttlefish, the giant is (unsurprisingly) the world’s largest. This one, filmed near Whyalla, South Australia, is in the middle of a mating ritual, showing off its ability to display an entire color spectrum on its skin. As the crew was returning to the boat, one member yelled that he’d spotted the cuttlefish. So they grabbed fresh tanks and went back down for more than 5 hours.
The cuttlefish’s colors can change based on whether it is experiencing aggression, fear, or sexual excitement; Hall even remembers seeing one go from ivory to bright red after eating a passing fish. Of course, nature isn’t without a sense of humor: Despite all of these color changes, the giant cuttlefish is color-blind.

Where’s Waldo?
No, it’s not a piece of coral. The leafy sea dragon, related to the seahorse, lives among the kelp and uses its distinct camouflage to protect itself from predators.
Despite its intimidating name, this creature was one of the safest the crew came across, since its mouth contains no teeth: The dragon eats by sucking its food through its tube snout.

Survival Of The Oldest
Like many of the marine species in the South Pacific, the green sea turtle is endangered—though it gets extra points for longevity, given that the species has been here since the dinosaurs. Here’s one munching on the tentacles of a glowing jellyfish in the Great Barrier Reef. Lucky for the turtle, it’s immune to the jellyfish’s sting.